The History of the Kenora Rotary Club begins at least by October 1919 when Dr. Crawford McCulloch, then governor of the 19th District of the International Association of Rotary Clubs, delegated Joseph A. Fife of Fort Williams to make a survey of Kenora area to ascertain the possibilities of establishing a local Rotary Club.

Joseph A Fife, a cousin to Ashton Thomas Fife of Kenora had lived and worked in Kenora for a period and moved to Fort Williams in 1909. On October 13th 1919 on a second visit to Kenora when he met with a number of Kenora citizens who showed an interest in forming a club. A report was sent to the International Association of Rotary Clubs at Chicago recommending the establishing a Rotary Club in Kenora. In this report Kenora was described as a "most beautiful" community located on the main transcontinental line of famous Canadian Pacific Railway 293 miles from Fort Williams and 133 from Winnipeg, a mecca for tourists and campers, who come there during the summer months to enjoy the exhilarating air, excellent fishing and beautiful scenery. The area boasted three very large flour mills, two large saw mills and a box factory, the latter being one of the largest in the country. The "Great War" had just finished and Fife had no problems recommending the establishment of a Rotary Club in the Kenora area.

For chairman of a committee on organization, he recommended the name of W. G. Cameron, President of Cameron-Heap Company Ltd., Wholesale Grocers.

The first meeting of Kenora Rotary Club was held Tuesday, February 10 1920 at the Tourist Hotel (later renamed the Kenricia). The club continued to meet weekly thereafter. Rotary International website officially issued on the Charter on March 1, 1920. The Rotary Club of Kenora held its charter night on Saturday March 20 1920 when it became Club Charter number 640, District 19. Twenty three members from the Port Arthur and Fort Williams Club and Fourteen from the Winnipeg Club attended the Charter Meeting. Joseph a. Fife who was responsible for the formation of the Club presided at the first part of the program and turned the gavel over his cousin Ashton Thomas fife the new club's Vice President.

Charters members as identified in March 24 1920 Kenora newspaper include

Of these 15 identified charter members, 10 subsequent became presidents of the club (See Links below for summaries of the  first 100 Rotary Presidents).

A dinner was held the last Tuesday of the year 1920 with over 130 Rotarians and Guests. Those in attendance that night were not recorded but on February 28 1922 many returned. tThe list may be found at http://www.retson.ca/kenorarotarystory.pdf

Note 97 and 39 are identical suggesting it was an unknown guest (possibly wife).

In 2003 a Kenora Trail Study identified various potential urban recreational trails. In the early part of the 2000, a group of Health and Wellness Providers in the Kenora Area known as the Kenora Health Providers Group met to determine ways to improve the health and wellness of residents of Kenora and the surrounding Area. As a result of a planning exercise a committee was formed was formed that became the Kenora Urban Recreational Trails Committee. This volunteer committee of interested citizens and staff of the City of Kenora provided knowledge and advice to the Council of the City of Kenora regarding trail development. In the early part of 2007, Diane Pelletier, a member of that committee, representing the Kenora Association for Community Living (KACL) brought the idea of an accessible trail to the attention of the the Executive Director of KACL, James Retson. The Executive Director then discussed the idea of KACL spear heading a financial campaign to build an accessible trail to David Lillico, Treasurer of KACL. The inspiration behind the trail was David's children, Patrick and Shawn Lillico, who drove their mobile wheelchairs all over Kenora but had no accessible nature trail. The cost of the trail was then estimated to be $20,000. James, also then President of the Kenora Rotary Club, thought he might be able to get half of this amount from the Rotary Club as the President Project. The amount of $20000 was raised with a year with the assistance of various individuals and Associations including the Retired Teachers of Ontario. The Rotary Way Trail was completed in 2009. Present to cut the ribbon was Patrick and Shawn Lillico (See picture below). The Rotary Way constituted Kenora's first accessible nature trail. 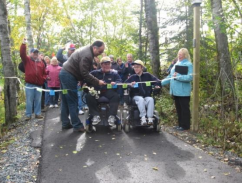